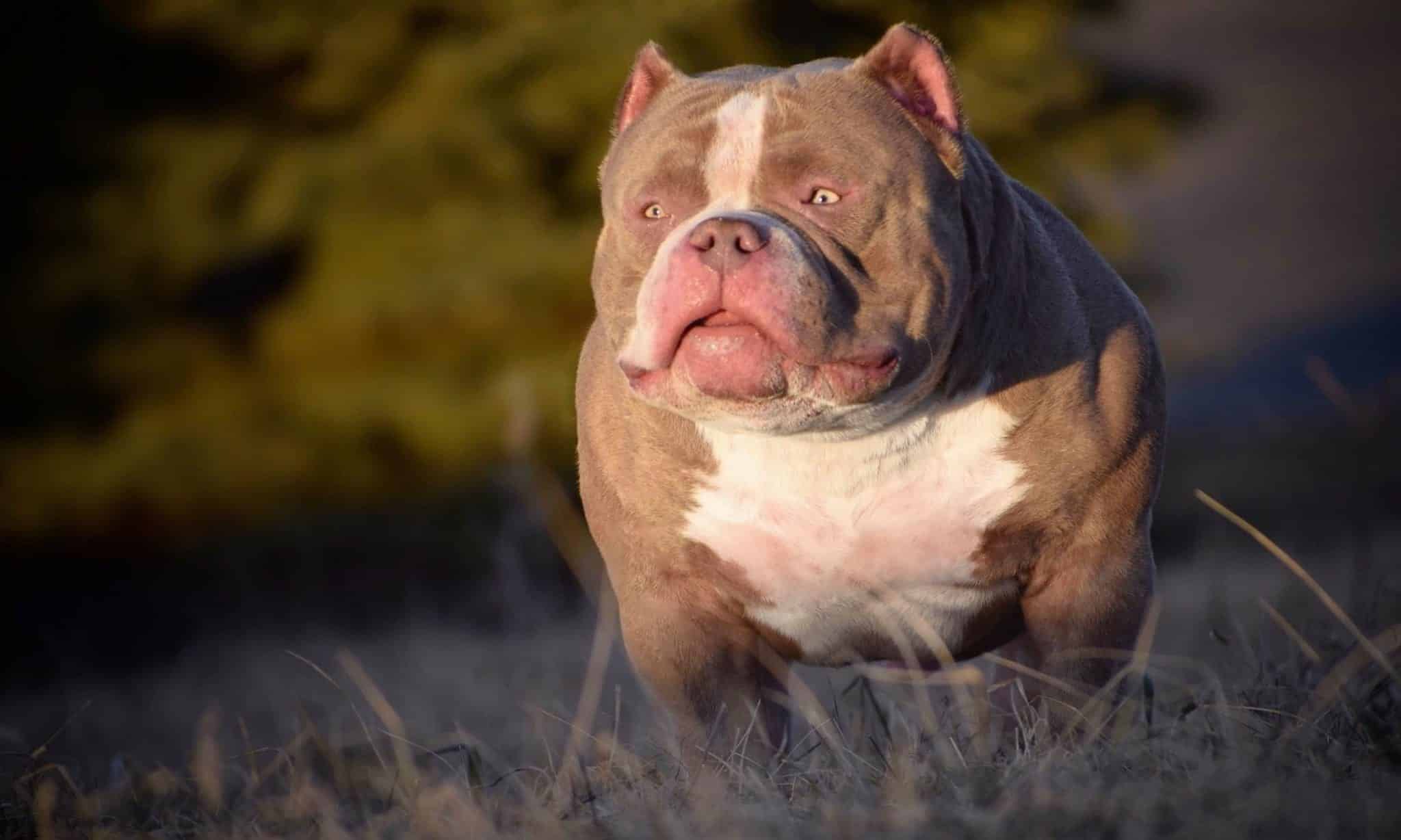 It is with heavy hearts we announce the passing of a member of our pack. We lost a rising star in the bully world way before his time, but more importantly we lost a family member, Vic & Diona lost a son, and their children lost their best friend.

Rampage was a big teddy bear, a gentle giant and he loved his dad Vic and mom Diona. Please respect our time to mourn this loss and we ask that your prayers and thoughts go out to the Venomline Camp and the Limas family. Rampage was actually on the way down for a mini documentary featuring him, King V and several of our females.

About an hour into the trip Vic & Diona heard him start to breathe heavily, which was abnormal for him. Especially in an air conditioned car. This comes as a huge surprise as Rampage was in great health, had great scores on all his health testing, no murmur, elongated soft palate or a single issue. Vic & Diona did everything they possible could to save his life and are devastated. 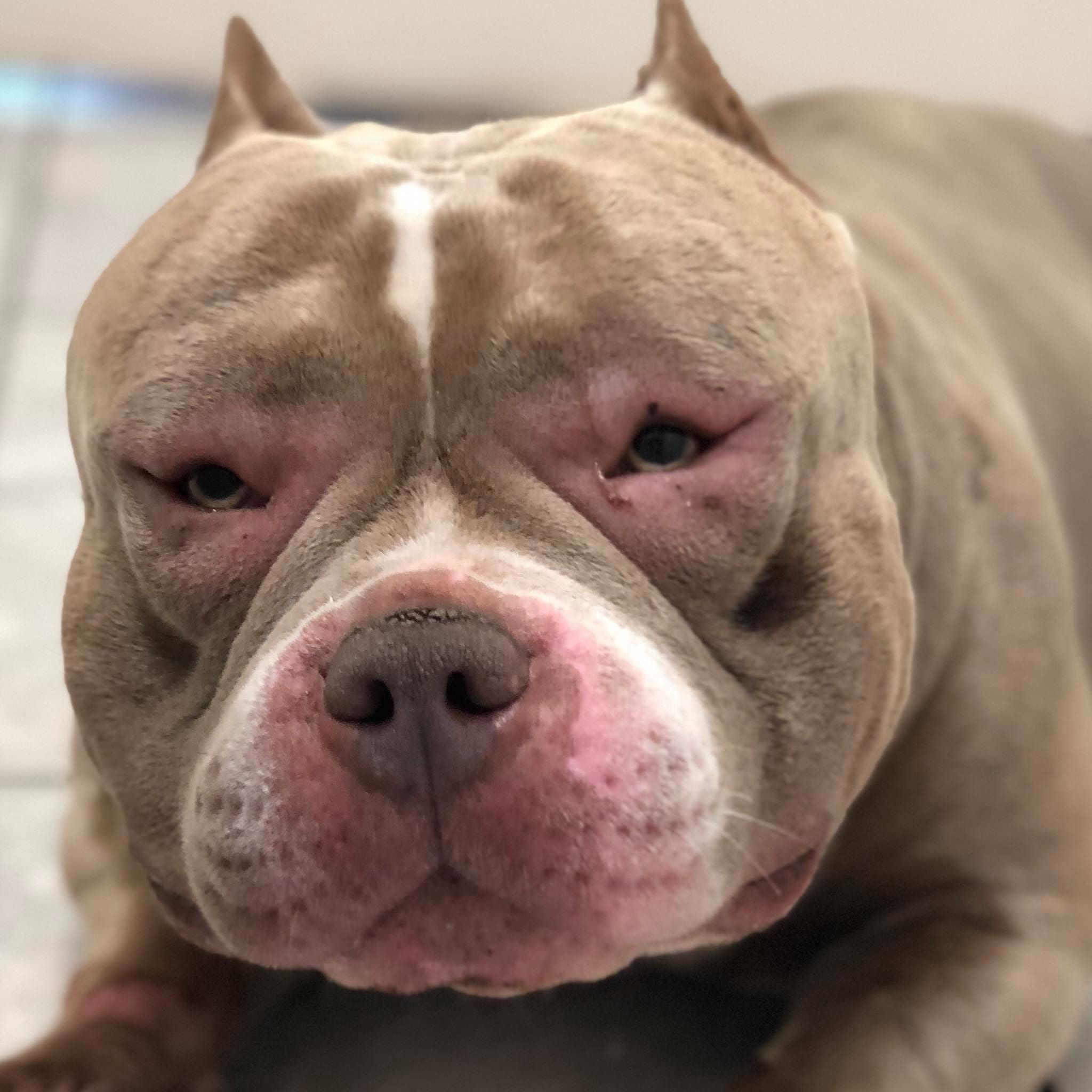 Chunk after being stung by a bee[/caption]

We do not know if he was tung by a bee or had a reaction to something at a rest stop. Some of you may remember when Venom "Chunk" almost died after being stung by a bee. But we were minutes away from an ER Vet and when it happened.

Unfortunately Rampage was over an hour away from the closest vet, as Vic & his family were all traveling down when they noticed he was panting heavily and his eyes were starting to swell up.

We will be finding out the exact cause soon, whether it was a bee or wasp sting, an insect bite or if he had an allergic reaction to something outside that caused anaphylaxis. It happened unexpectedly and sudden.

TO ALL AMERICAN BULLY OWNERS

Please be on guard when traveling with your bully. Especially to new environments. Pack an emergency kit and be prepared for when the unexpected occurs.

Anaphylaxis causes your immune system to release a flood of chemicals that can cause you to go into shock — your blood pressure drops suddenly and your airways narrow, blocking breathing.

Anaphylaxis symptoms usually occur within minutes of exposure to an allergen. Sometimes, however, it can occur a half-hour or longer after exposure. Signs and symptoms include:

If there’s anything good that can come out of Rampage’s passing, we are reminding all bully owners that the unexpected can happen and tragedies can occur in a matter of minutes.

To honor him, we're asking that every bully owner to remember to always travel with a first aid kit- Benadryl, Alcohol swabs, lemon juice, and an epi-pen for emergencies. Even with all of these, tragedies can still happen, but hopefully this will save the life an another bully and could spare another family from suffering through such a devastating loss.

We are all heartbroken, please respect our time to mourn and show some love and support especially to our team members Vic & Diona. You're gone way to soon, and we love you big fella.

CUSTOMERS WHO'VE RESERVED HIM AT STUD

To all who have reserved him at Stud- as always we will make sure you’re good. We just ask for a few days before contacting about business. This was more than just a Stud- this was a sweet and gentle big bear that made the lives of everyone who met him better.

He will be remembered for that huge George smile. 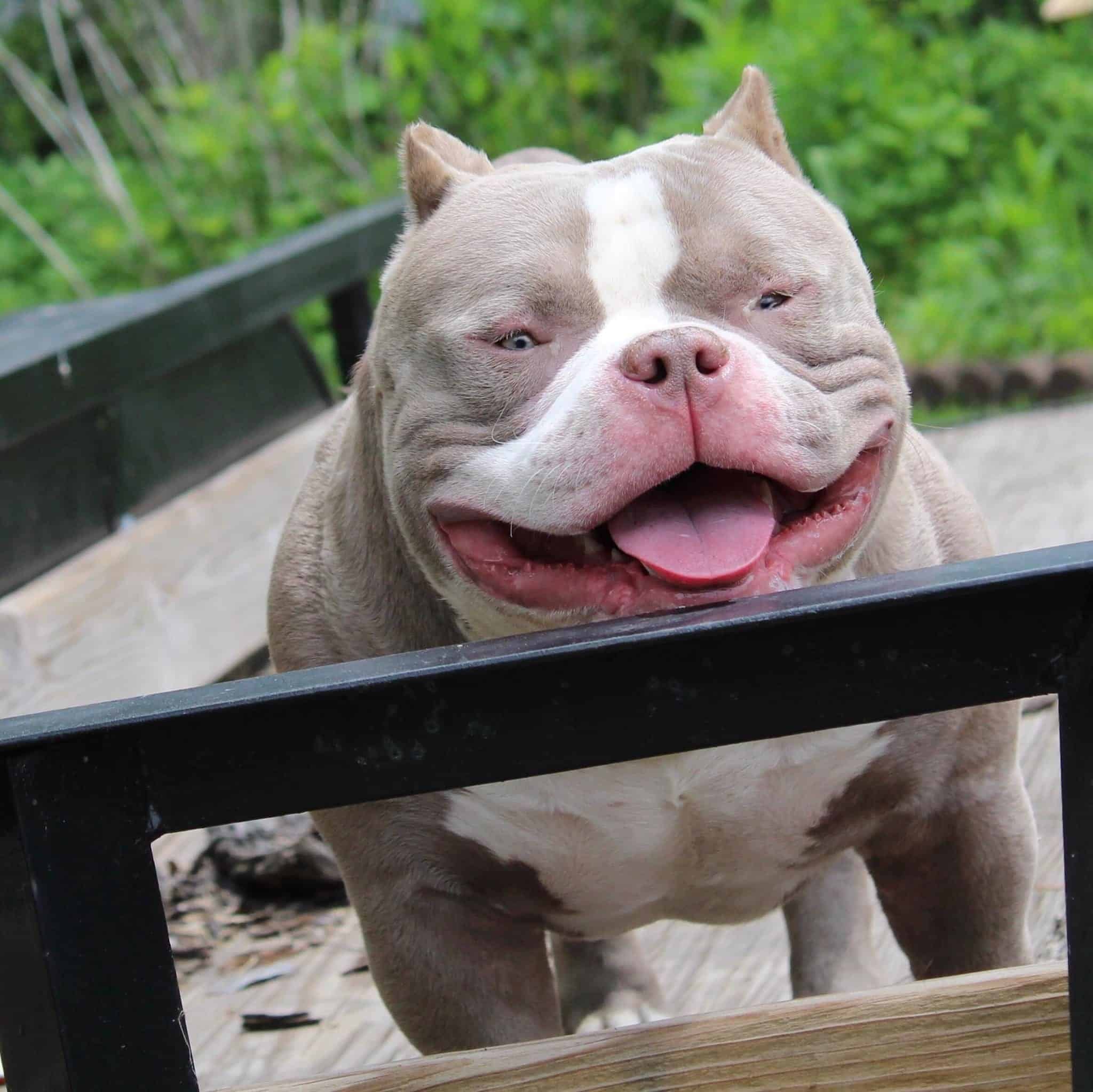 Still reeling from the loss and feeling a tremendous amount of guilt, I decided to take Rampage's dad Venom, brother King V and littermate sister Lil Ting to the park to clear my head. As a partner, a co-owner or a friend- you're supposed to be there for the other person. That's what a partnership is all about: sharing in the losses and celebrating successes together, as a team. To have the other's back and to stick together through thick and thin, no matter what. Maybe I'm old school, but shit like that means something to me. But, this is where I failed, and it has stuck with me all afternoon and everyday sense.

Saturday at around noon I spoke to Vic and got word they were on the way. I needed badly to catch up on sleep and figured Saturday would be a great time to do that. So I put my phone on Do Not Disturb, because it goes off non-stop throughout the day and I planned to watch a movie and get some sleep. I woke to around 30 missed calls about an emergency with George.

My phone was on Do Not Disturb. I was not there when my partners needed me, and that shit is gonna stick with me for a while. But it's not about me, it's about how helpless Vic & Diona must have felt and me not being able to help when they needed me. I had no way of knowing this could of happened, and maybe I couldn't have done anything to help save George in that moment, but maybe I could have.

The thought that maybe had I been available when they needed me.. maybe Rampage would still be here. It's been making me sick to my stomach sense Saturday. Vic and Diona's whole family were in the car with him when it happend... their kids are crushed. We all loved Rampage, but he was like a kid to Vic & Diona. As a Co-Owner you're supposed to be there for the other person and help care for the dog that you two produced, purchased or decided to own together. As a friend, you're supposed to be there when the other needs you, and I wasn't. I'm so sorry.

SUNDAY AT THE PARK "THIS ONE'S FOR GEORGE"

On Sunday I took Rampage's dad Venom, his littermate sister Champion Ting, and half brother & sisters Khaleesi and Swizz to the park to get out of my head.

Here's video of an afternoon out, honoring fallen Rampage. Outside playing and happy, just like he would have wanted it. 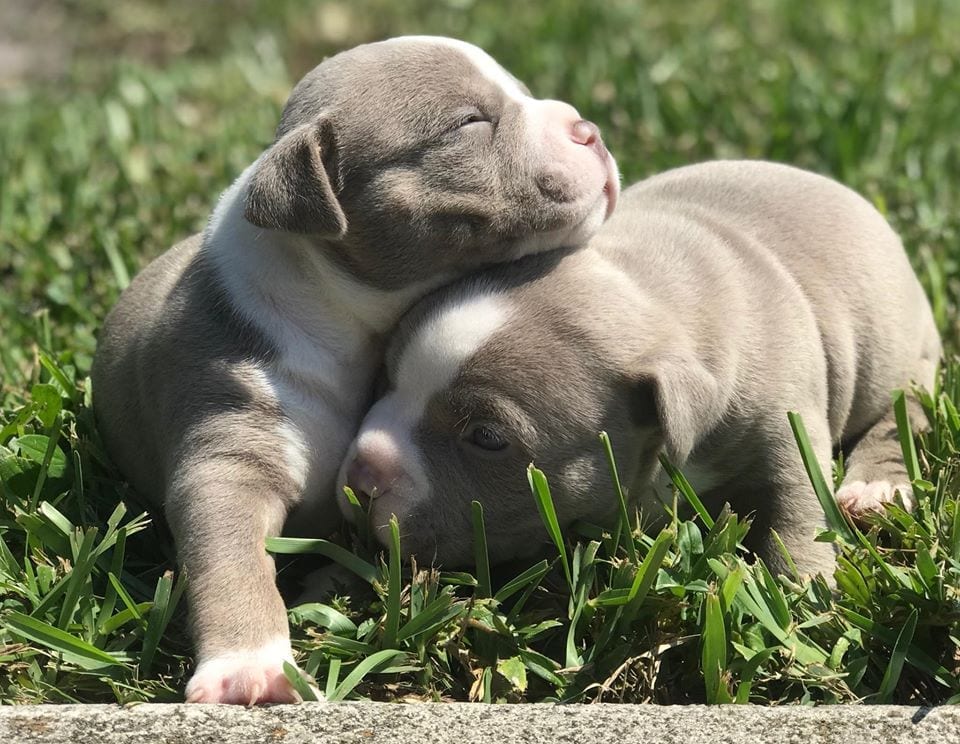 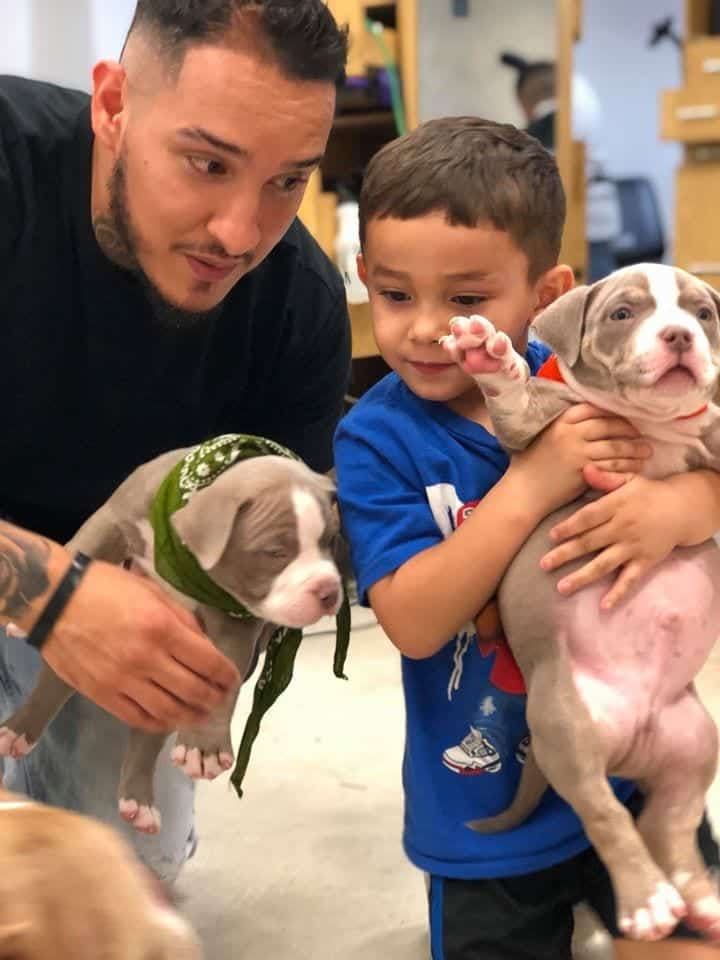 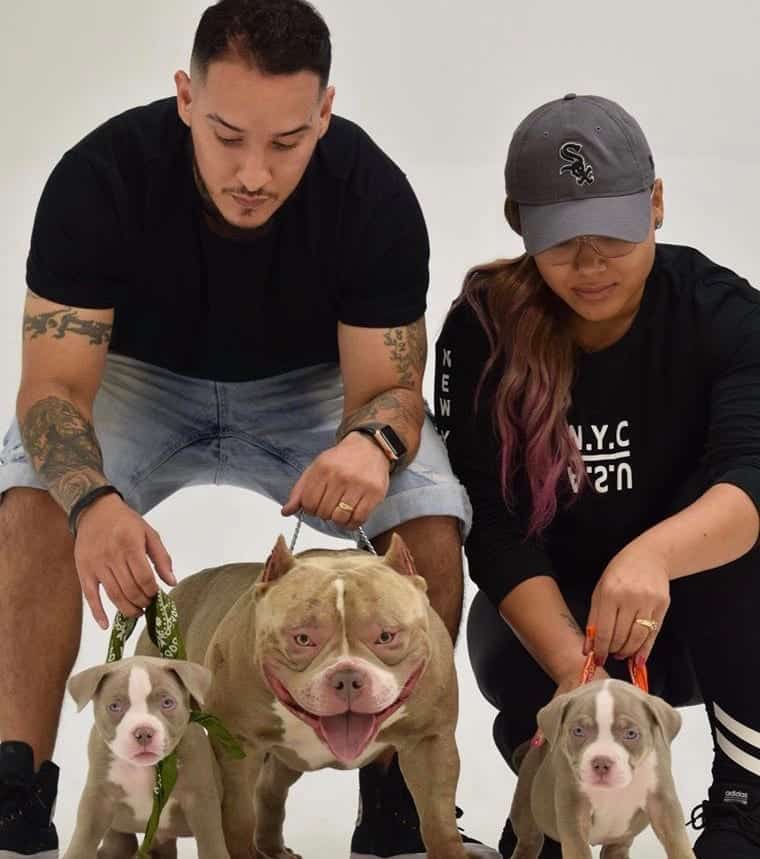 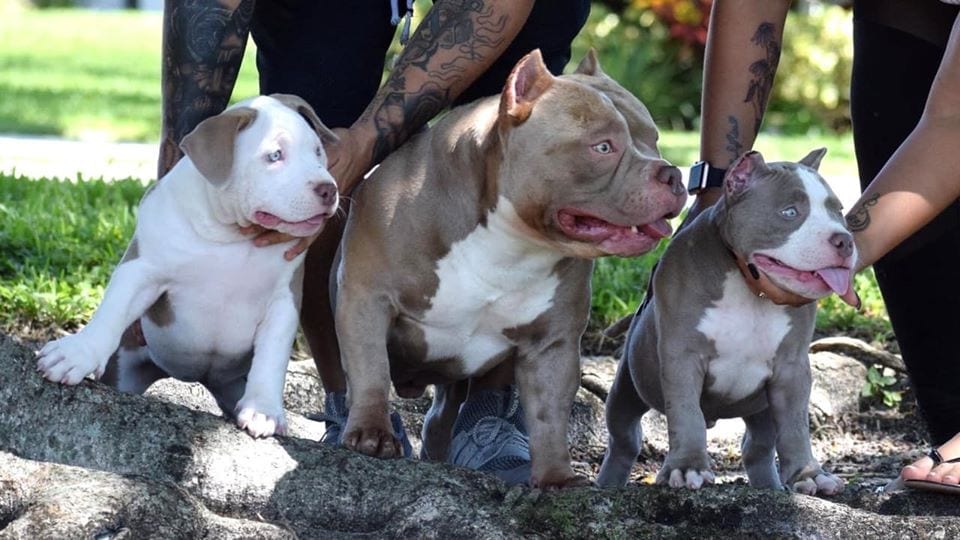 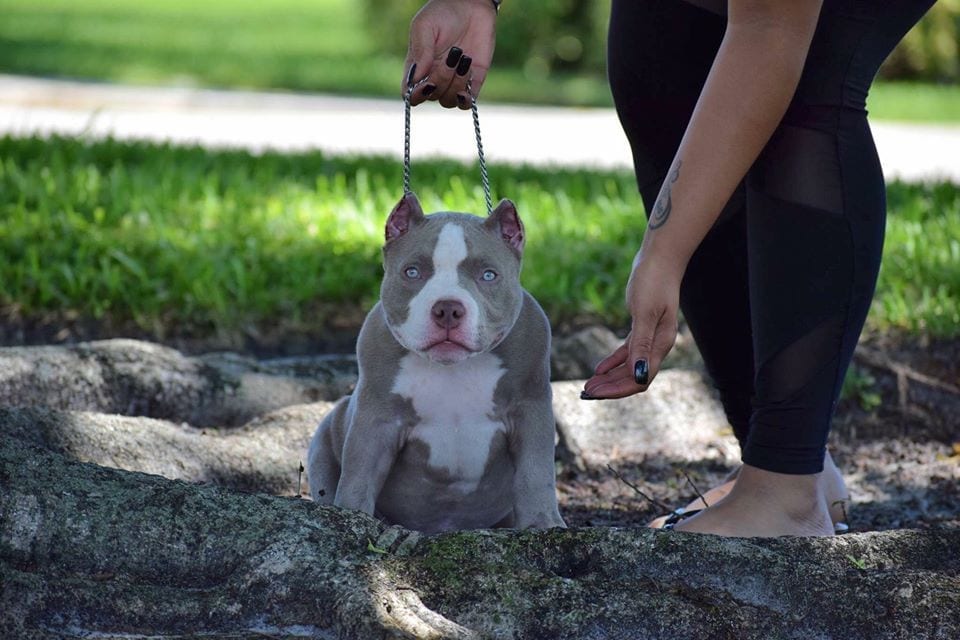 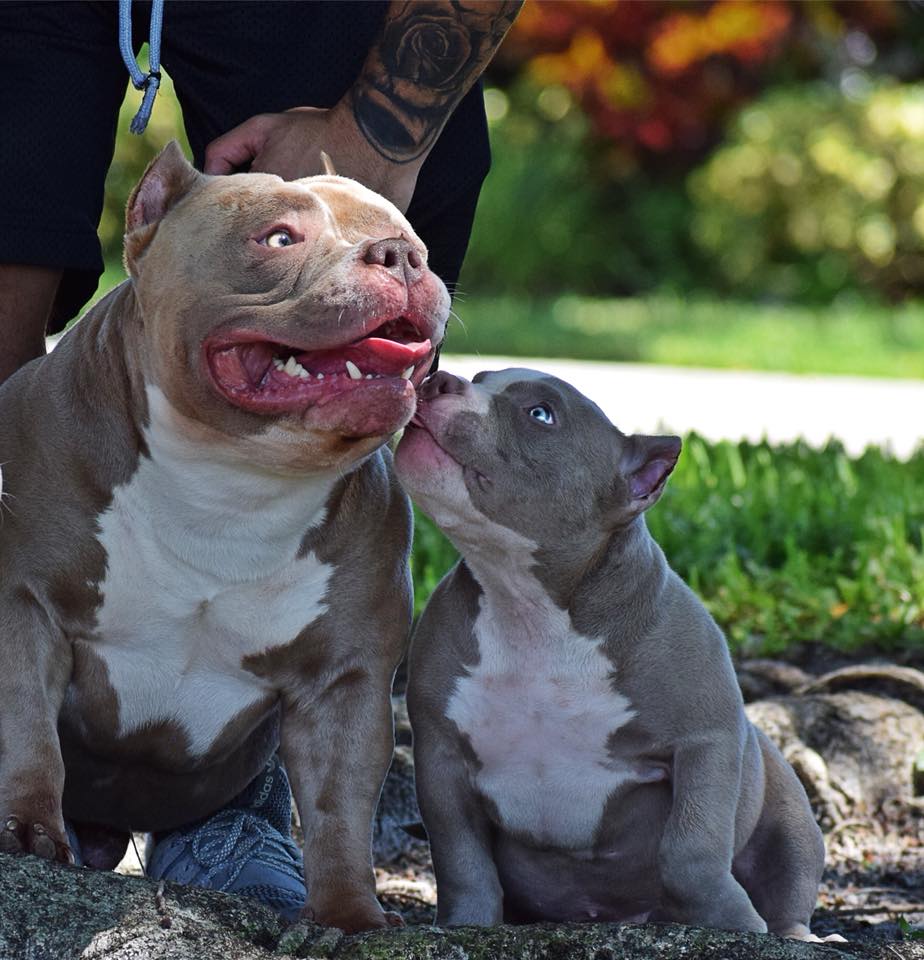 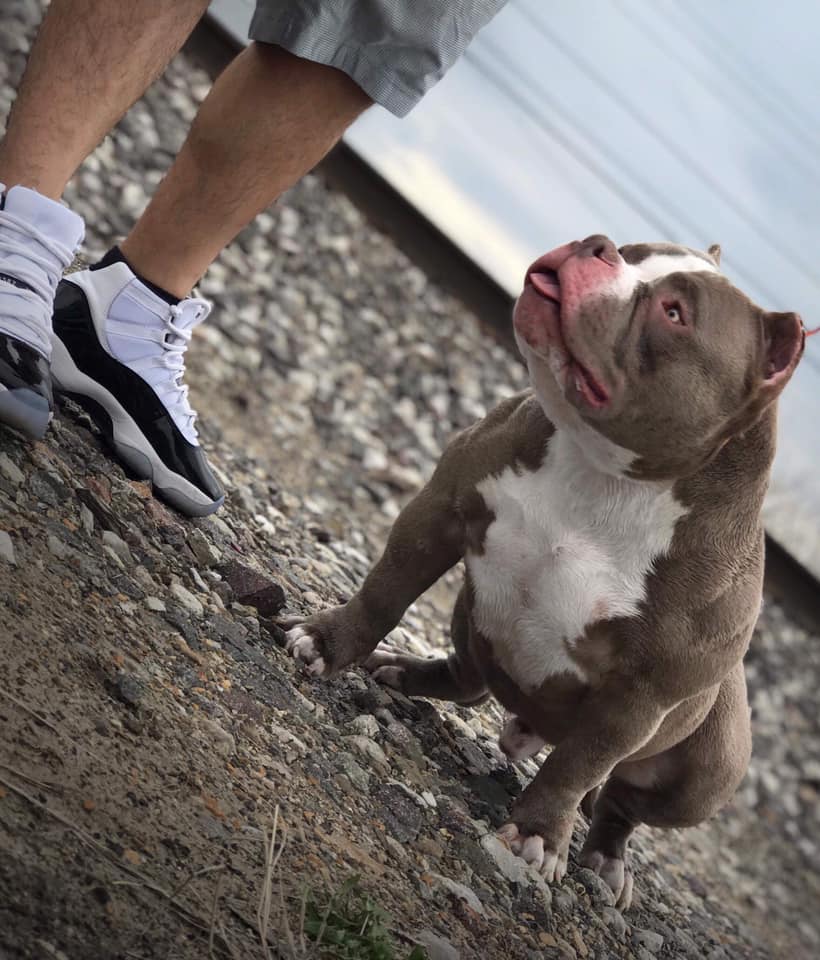 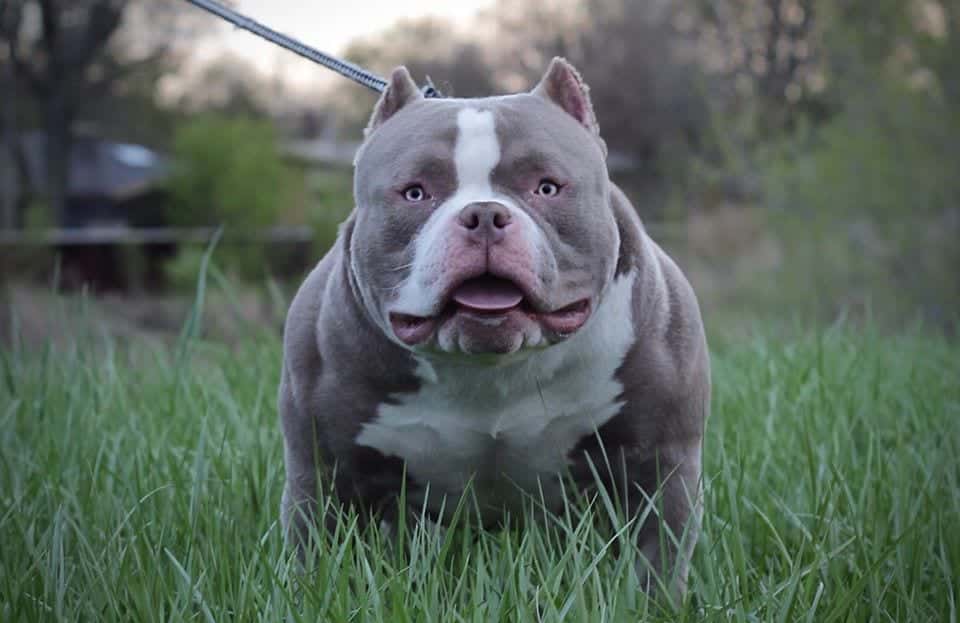 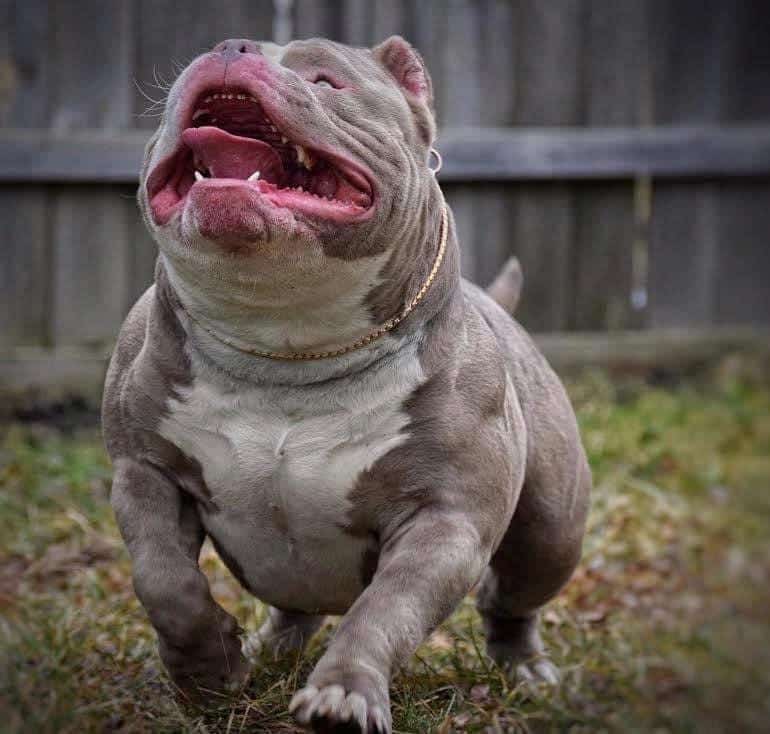 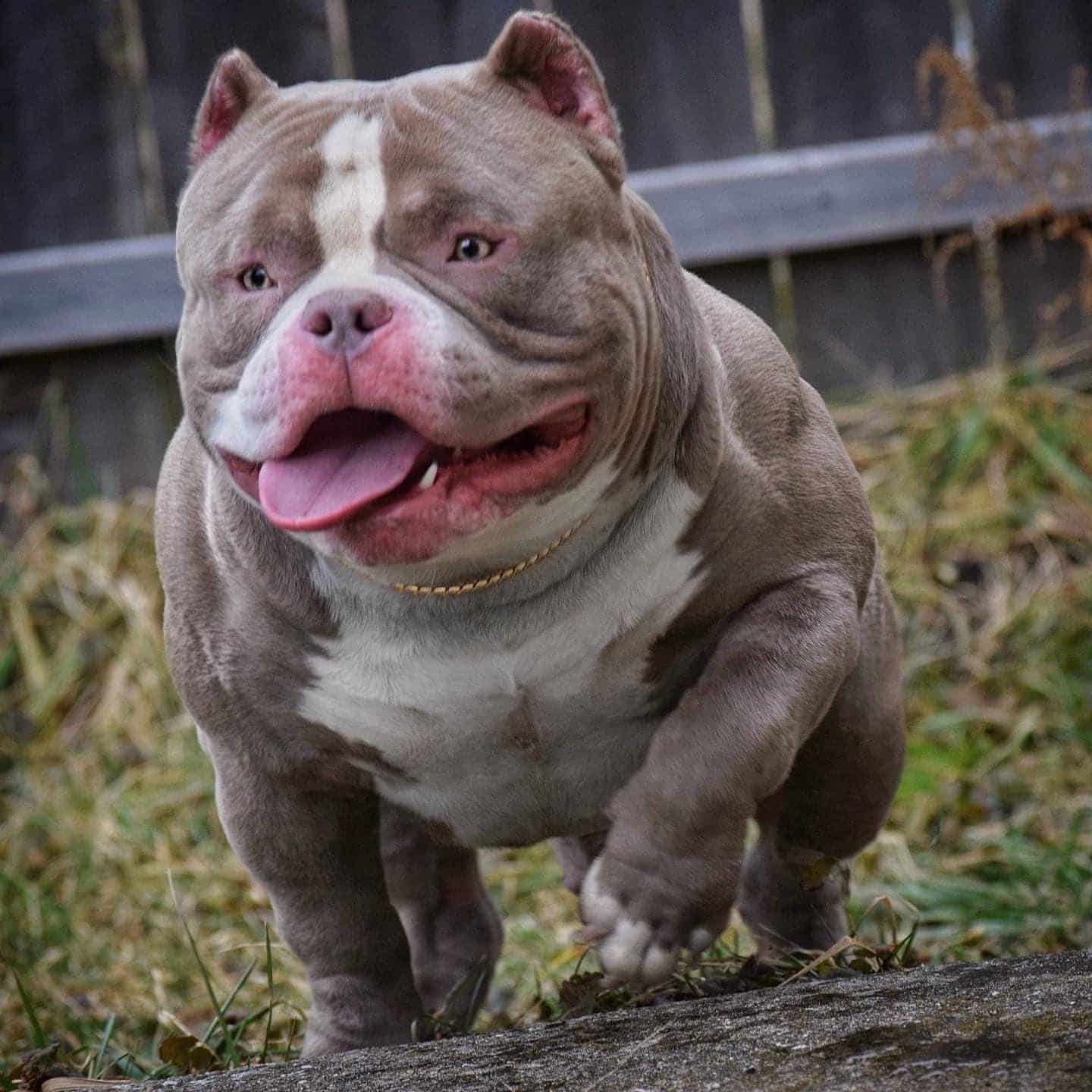 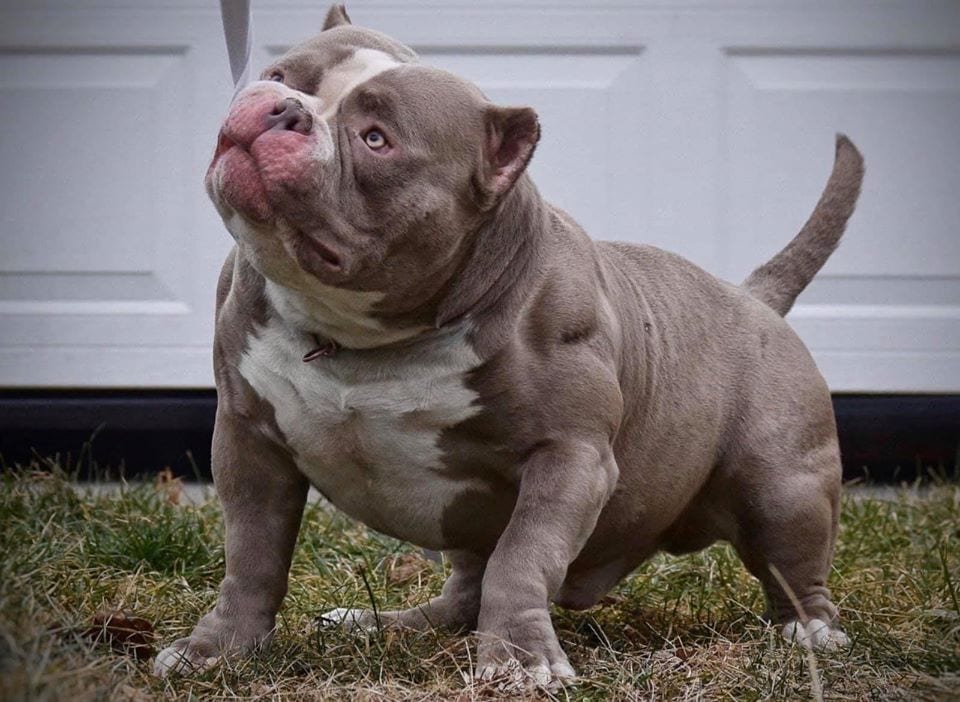 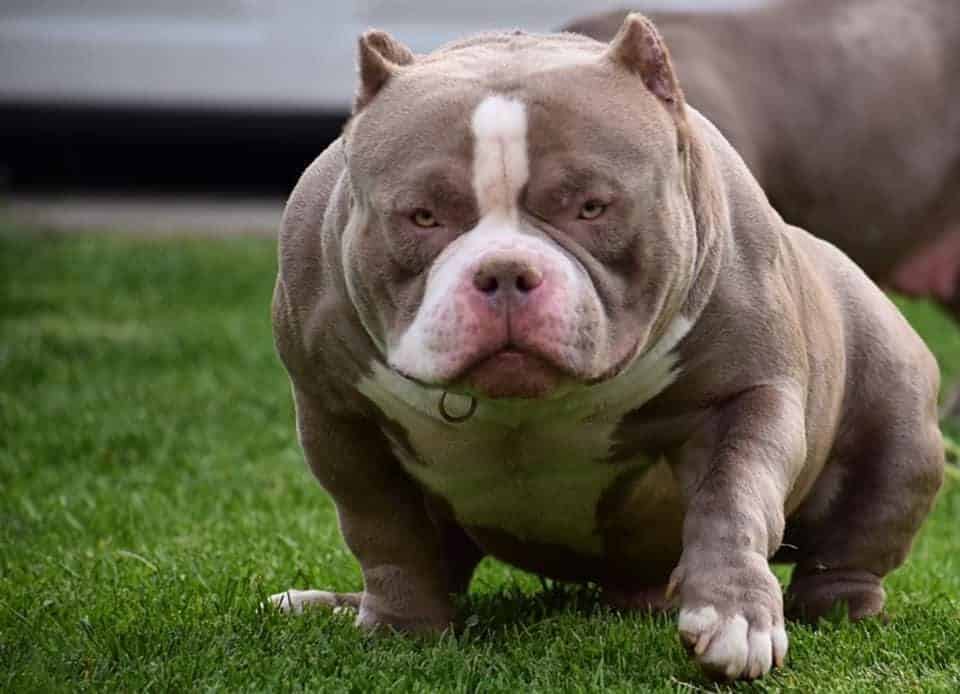 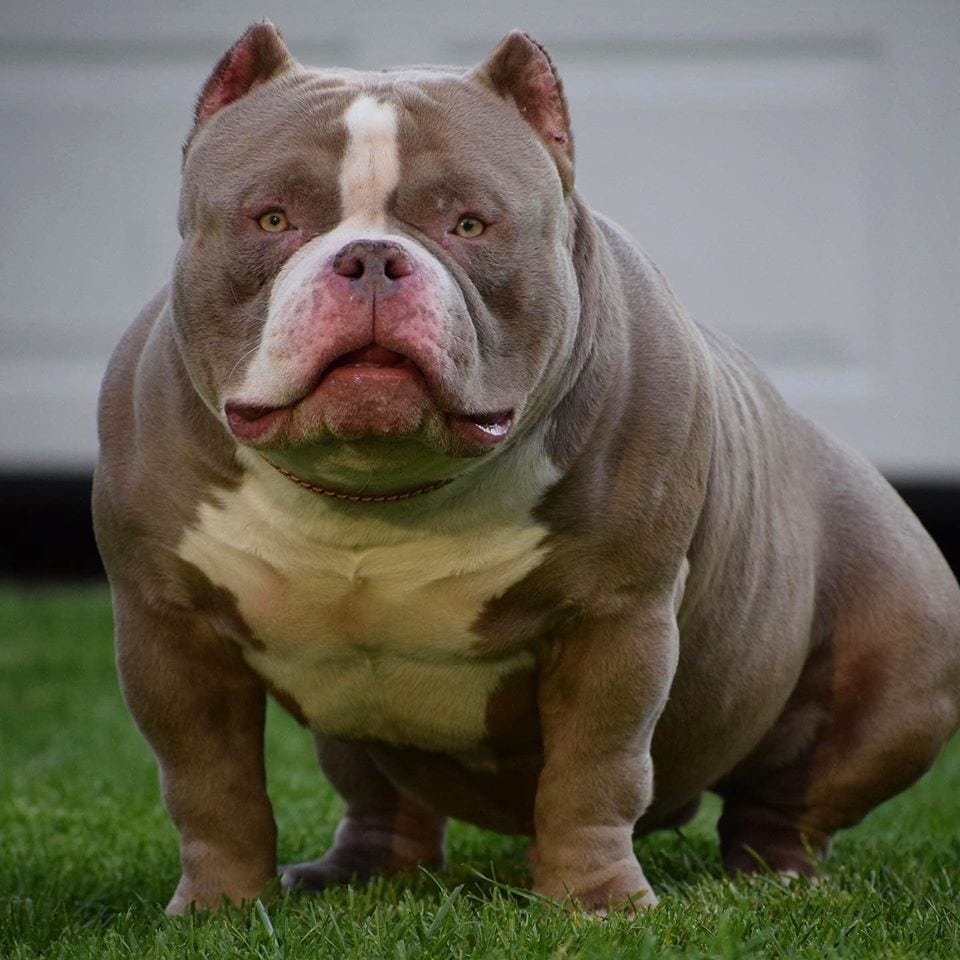 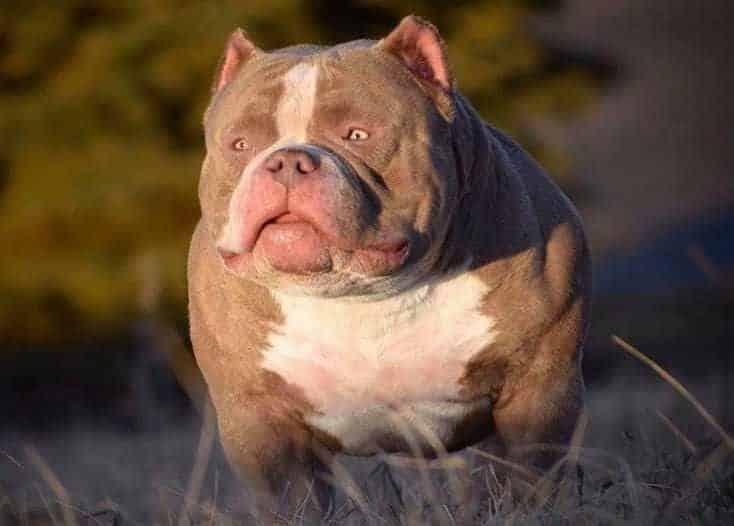 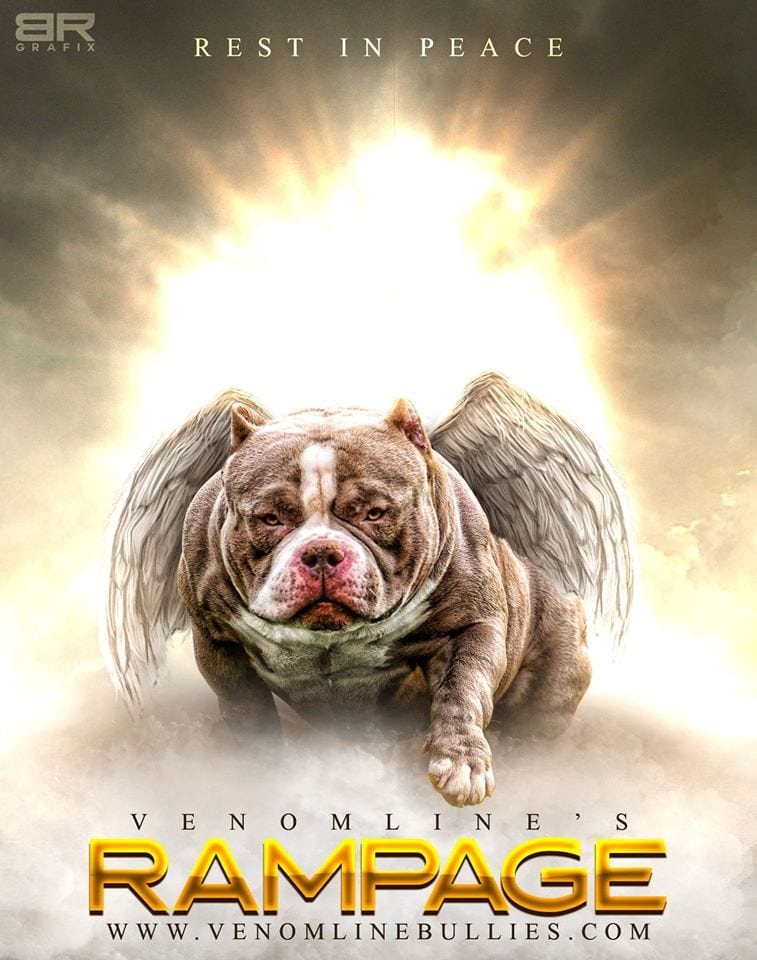 George, We will all miss you.